For the past two months I’ve had the pleasure of putting my 2012 Trek Ticket Exchange through it’s paces and what a few months it’s been! I’ve been impressed with the bike since the second I pulled it out of the box to build it. First thing noted is obviously the looks, the bike is sharp. Trek really did a number with this bike with it’s dark raw color, green decals, clean lines, welds, and gussets in combination with Treks beefy Alpha Gold Aluminum frame. I could go on, but I’m sure you’re interested in more than its looks.

As far as parts, there’s not too much to complain about. As said earlier the frame being built from Treks own Gold series aluminum is a great start for a solid bike. Being built up with big name parts such as a Manitou Circus fork up front, Formula wheels, SRAM X4 drive train, Shimano hydraulic brakes, and a slew of other goodies, the bike is ready for some abuse. I changed a few parts (wider bars and shorter stem) on the bike to make it fit my liking a bit more. This bike is ready to ride and the parts that come stock add to the bikes versatility and are definitely in for the long haul. Trek also has a single speed version called the Ticket Stub which has a very similar build kit at a lower price point.

The geometry though, is really what makes the bike shine for me. I’ve got a 14.5” frame to fit my 5’10” build and I couldn’t be happier. With the bikes 69 degree head angle, 16.5” chainstays, and 41.5” wheelbase it flies over jumps, rips through corners, and accelerates like a rocket. Keeping things low with a 12.4” bottom bracket height certainly helps keep your stability though those tight corners and technical sections as well.

How does it ride? Fast, responsive, confidently, and fun come to mind. I’ve come from a race background so getting on a bike designed to be 360 flip whipped by Brandon Semenuk is certainly exciting. It took literally no time before I was hitting anything and everything I pointed the bike at. I’ve found myself coming into jumps entirely too fast as the bike needs nothing to be launched over gaps and handles every bit of them with ease. So long as I can hold on this bike rockets through berms coming out with what feels like twice the speed I went into them with. Needless to say I’ve been doing a lot of building and rebuilding since I started pedaling this thing around.

I can say with ease Trek nailed it with this bike. In fact, I’ve come to notice my face hurting from the ear to ear grin I have after just a few minutes on it. With such a versatile and durable build, great looks, and fun ride the Ticket is the bike to have for your dirt jump, street, or slalom/4X bike. If you’re really looking for a great ride, you better get your Ticket, I’ve got mine. 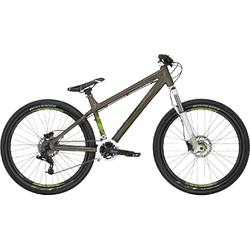