With the release of the 2015 Fuel EX 27.5, Trek partnered with Fox Racing Shox, a household name in the MTB suspension world, and Penske Shocks, big-time innovators in specialty automotive racing suspension, to create Re:aktiv, a totally new concept in mountain bike suspension.  So just what is Re:aktiv?

Most shocks on mountain bikes use either progressive or digressive damping.  In a progressive setup, the bigger the bump, the more damping you get.  In a digressive setup, damping increases rapidly as bumps get bigger, but then it levels off.  While each setup has its advantages, neither is ideal for the modern trail rider. 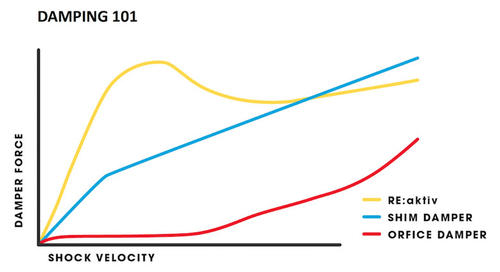 In contrast, Re:aktiv is the only bike shock on the market to use regressive damping.  When riding over small bumps in the trail, Re:aktiv feels firm and efficient, allowing the rider to feel the trail and maintain his or her chosen line with minimal loss of pedaling force.  On big hits, the shock “gets out of its own way” with an initial decrease in damping force.  It delivers instantaneous, supple control, keeping the wheels on the ground for maximum traction.

What can Re:aktiv do for me?

Re:aktiv has several advantages over other suspension setups on the market:

And while there are other technologies out there, Re:aktiv is the only product of its kind on the market, and it’s only available from Trek.

Re:aktiv damping isn’t replacing Fox’s DRCV (Dual Rate Control Valve) on Fox’s shocks.  The dual-rate air spring, which offers a higher spring rate on small bumps and a lower spring rate on big hits, is the perfect complement to Re:aktiv damping.  Together, they form what we feel is the best production trail suspension system on the market.

Curious?  Come to Agee’s and test ride the 2015 Trek Fuel Ex 9 with Fox DRCV/Re:aktiv suspension and see what all the hype is about.

And for the tech-heads:
http://www.bikemag.com/gear/reaktiv-detailed-look-treks-f1-inspired-shock/