In 1988 high-end bicycles were constructed of steel, down-tube shifters were on all the pros' rides and toe-clips were still commonplace. And if it weren't for the advent of one company, Zipp, that very year we may still be riding those same bikes today. The rogue start-up out of Indianapolis, Indiana stunned the cycling industry with two technologically advanced carbon fiber disc wheels that promised to revolutionize the bikes we ride and our concept of speed. 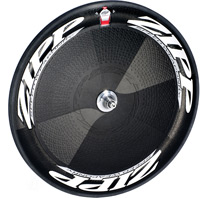 Just two years after their first disc wheels were unveiled, Zipps were piloted to victory in the Hawaii Ironman, which served as the beginning of the incredible relationship between Zipp and triathletes, a group that's notoriously fickle about their components. Zipp wheels are so renowned in tri circles that they were ridden by a record 66% of the field at the 2008 Ironman World Championships.

Zipp is a leader in the road world, as well. Their first deep-dish carbon wheelset, the 400, was released in 1991 and they've since released a series of incredibly aero and light wheels like their hallmark 404 and the super-fast 808. They've also been the main innovators for other modern technologies such as ceramic bearings, carbon cranksets, integrated aero bars and super-light carbon handlebars. These breakthroughs have brought them victories in countless triathlons, national championships, world championships, Olympic medals and monuments of pro cycling like Milan-San Remo, Paris-Roubaix, the Tour de France and more.

Zipp's reputation for excellence has made them the choice of many top athletes in every cycling discipline. America's favorite team, Garmin-Slipstream, uses their wheels as well as the Cervelo Test Team of Tour de France winner Carlos Sastre and a large contingent of triathletes like Tim DeBoom and Normann Stadler.